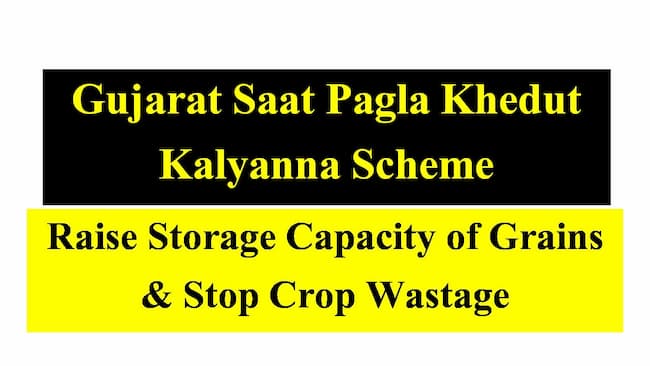 In the rainy winter condition, the crop of the farmer will totally be destroyed by the situation. Due to which, the total investment of the farmer is a finished and complete waste. In this situation, the farmer has no option to survive.

However, to understand the situation of the farmer, the government of India and the government of any state have announced many schemes that will help the farmer to survive and get returns of their lost crop. The government has provided free crop insurance to all the farmers to stay in rainy, drought, and climate change conditions.

The government of Gujarat has announced a scheme named Gujarat Saat Pagla Khedut Kalyan Scheme on an event of the Department of Agriculture and farmers’ welfare Corporation by Chief Minister Shri. Vijay Rupani.

The main aim of the government to launch this scheme to upliftment, new crop production, crop storage, distribution, cow-based farming methods. With the help of this scheme, the government wants to improve the agriculture sector.

The scheme named Gujarat Saat Pagla Khedut Kalyan scheme is one type program under which many schemes will be announced. Under this program, the government will promote many schemes related to the farmers.

The government will announce this scheme to the upliftment of farmers, modernization of the farming procedure, proper distribution, and storage of the crop. Under this program, the government of Gujarat has already announced a scheme named Mukhya Mantri Pak Sangrah Yoajan. In this scheme, the government will provide financial assistance to the farmer who is economically weaker to build an on-farm storage house.

With the help of an on-farm storage house, the farmer can prevent their crop from unwanted weather conditions. Under this scheme, the Chief Minister also announced an Rs.300 incentive for the members.

With the use storage house, the farmer can prevent their crop from the grave rain condition, cyclon conditions, etc. However, we all know that the monsoon season is not regular in India. Due to some weather activities in the pacific ocean, the Indian monsoon conditions affect more.

The government has introduced a scheme called Kishan Privahan Yojana. Under this scheme, the government provides financial benefits to the farmer of Rs.50000 to Rs.70000 for purchasing light load-bearing vehicles. This type of vehicle will provide farmers make easily available technology, and they can do their work quickly. The output of work is better than before and efficient.