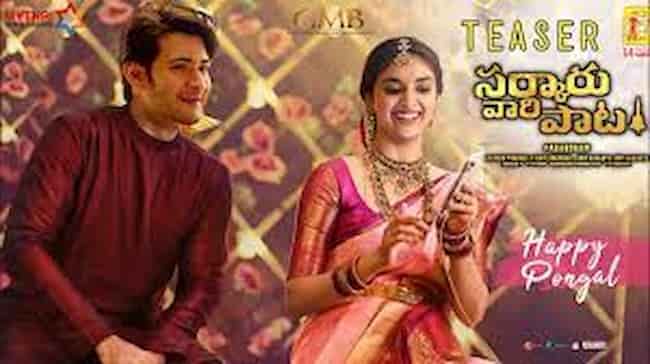 Sarkaru Vaari Paata Teaser: Will Release on the 46th Birthday Of Mahesh Babu

Mahesh Babu is the most popular and fantastic actor in the south Indian film industry. The people are very much like his acting in the movie, and he is also making their gestures so that the people like him very much.

Every year he is doing something new and outstanding that the people can have some good reason to like him and follow him.

The most awaited actor film is Mahesh babu’s Sarkari Vaari Paata is going to release in the Indian film industry. Mahesh babu has its fans outside of India also. Many fans are coming to India to watch his movie especially.

When the fans come to know bout the teaser of his upcoming film has released, they make their viewer at it pick. Right now, the viewers of the Sarkari Vaari Paata are at its pick.

However, the director of the movie has decided to release this movie o the birthday of the Mahesh babu as the shooting of the movie is still incomplete.

Due to the COVID restriction in the nation, their director can not complete their movie shooting of the Mahesh babu. India is fighting with the covid-19 in recent days.

They are making their medical system very good, but they cant. Every day cases are increasing of covid-19.

The people do not understand not to go out and to wear the mask. They are going out for chilling, and they are not wearing the mask.

Due to the carelessness of the people and the government, the cases are increasing in India.

Due to the infection in the stylist of the Mahesh babu, the shooting of the film is stopped.

The director of the movie and producer and co-producer of the movie is going to release their movie on the 46th birthday of Mahesh babu, and that is on 9th august 2021.

The makers have released the teaser and the poster of the movie. Without this, they are not disclosing anything from the movie.

However, the fans are excitedly waiting for something from the movie.

By respecting the fans, the movie makers release the background music of the movie. The music is also getting huge responses from the public.

They are going to be super hit on the internet. If you have not listened to the background music, you should watch and listen to the music. It is excellent.