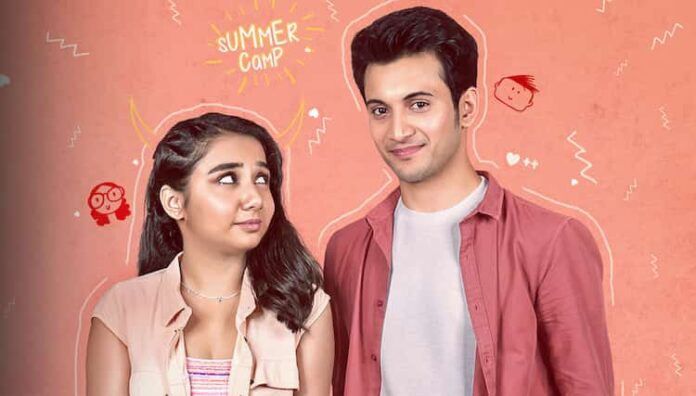 One of the most awaited Netflix series Mismatched is now soon going to be released. Fans will be getting their Mismatched Season 2 Trailer released by tomorrow and they can know more about the upcoming season of Mismatched. 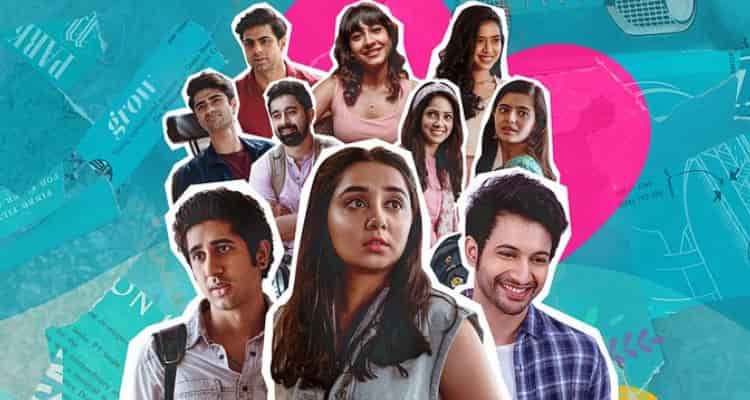 Fans of Prajakta Koli a.k.a. Mostlysane and Rohit Saraf can now get to see the official poster and the release date announcement!

The second season of the Prajakta Koli starring series is on 14th October 2022. Soon, Netflix will start streaming all-new episodes of Mismatched Season 2. Fans can then enjoy binge-watching their favorite series on Netflix. There are so many fans who have been waiting for the series to be released. Their wait is over now as the series is going to be released in just a few days.

Mismatched Season 1 was released on 20th November 2021 and it has been such a long time since then. Quickly after the release of the first season, fans loved the series.

One of the reasons was it casts young, popular, and talented cast members such as Prajakta Koli, Rohit Saraf, and many more. Prajakta happens to be one of the leading YouTubers of India and has quite a record for making various types of videos, shows, and much more.

WE HAVE A DATE FOR OUR NEXT NON-DATE 🗓️
Mismatched Season 2 arrives on 14th October! ❤️#MismatchedOnNetflix pic.twitter.com/XSbstuSjAT

Fans can watch their upcoming favorite series’ trailer and wonder about the storyline and newly added cast members for the second installment.

The series happens to be the adaption of a Novel. The novel has a backdrop of the United States whereas the series had adapted to keep Jaipur, Rajasthan as the backdrop for the story.

It is a romantic comedy series starring Prajakta Koli as Dimple Ahuja and Rohit Saraf as Rishi Singh Shekhawat. Dimple wants to become a tech wizard and she is already a dope gamer, who wins at almost every game she plays. 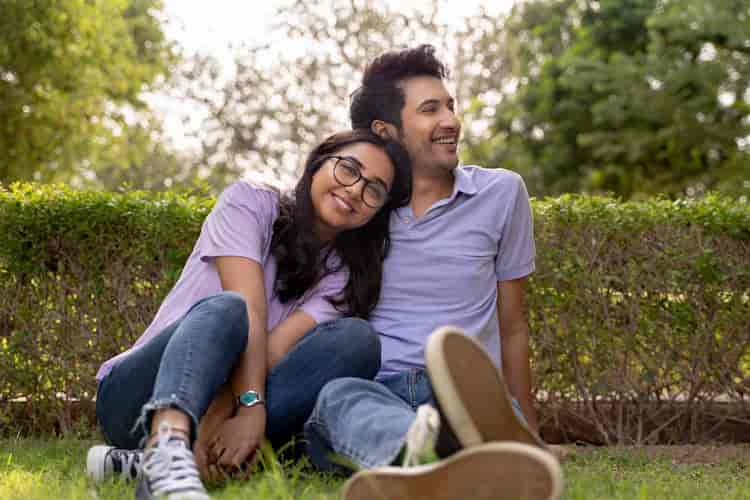 Rishi happens to be a traditional and decent guy who lives in Jaipur and is quite hopeful and high on love. Just before his admission into Aravalli Institute, he found out about a possible match – a girl for arranged marriage from his family, his grandmother. And that girl was Dimple.

When he got to know that Dimple is also coming to Jaipur and they will be in the same institute, his happiness was over the roof.

The next day he meets Dimple and calls her “Hello future wife” which didn’t go as well as he planned. Upon hearing such words from a guy whom she saw for the first time, Dimple spilled cold coffee all over him. This scene came out to be one of the most popular and iconic scenes from the series.

There are a few more additional characters in the series. Their storylines are also explained and it turns out to be quite interesting.

Rannvijay Singha also plays the role of Sid who happens to be their professor. Vidya Malvada from Chak De India is also in the series as Zeenat Karim. 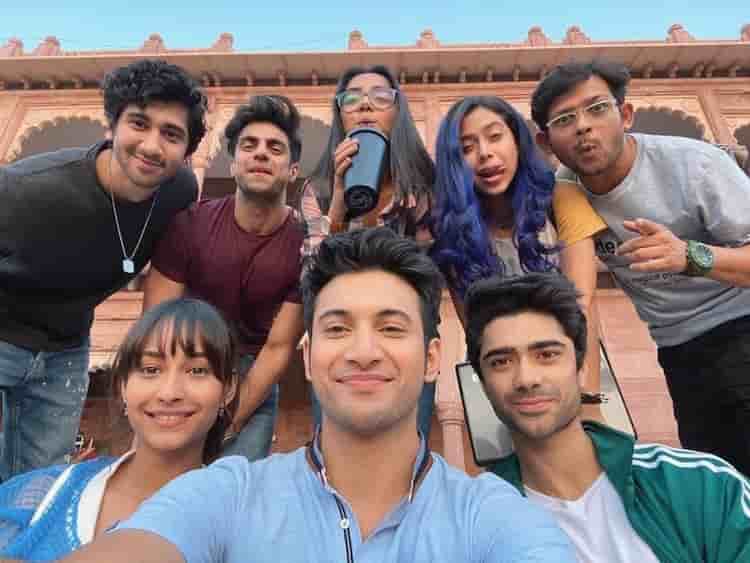 For many years now, Prakajta Koli has gained much deserving fame and name with her work on various projects. Initially, she started her career with funny daily life YouTube videos where she plays various characters. Soon, with her acting skills, people started to love her and now she has 6.74 million Subscribers on YouTube.

She even appeared in a variety of reality shows and tv shows with many popular Bollywood actors. She was also seen in her short film Khayali Pulao and was much appreciated for that. Recently, she played one of the lead roles in the Bollywood movie Jugjugg Jeeyo. She has appeared in many music videos too.

He has also worked in several films and series. He first appeared in a supporting role in the Bollywood movie Dear Zindagi. He was also seen in Hichki, The Sky Is Pink, and Ludo. His television series include Best Friends Forever, Ek Boond Ishq MTV Big F, and many more. He also has worked on one music video titled Shola.

Along with these original cast members, Mismatched Season 2 is also going to star some new faces. The speculations were that there are going to be some new students who will be seen in the second season. So for that, new cast members have been recruited.

Based on a Novel

There’s a novel When Dimple Met Rishi by Sandhya Menon. It was released in 2017 and now it has been adapted by Gazal Dhaliwal and turned into Mismatched series. The director of the series is Akarsh Khurana and Nipun Dharmadhikari.

As we already saw in the finale of the first season, how Dimple went on kissing Harsh and everything went to hell. There are so many lead characters whose life has so many complicated things that need to be uncomplicated. Each of the characters has their own story and it will be very interesting to see how it all entangles with each other.

A video just dropped the latest news about the release date and the trailer release. It features the lead actors of the series telling fans about the latest developments for the Mismatched Season 2. 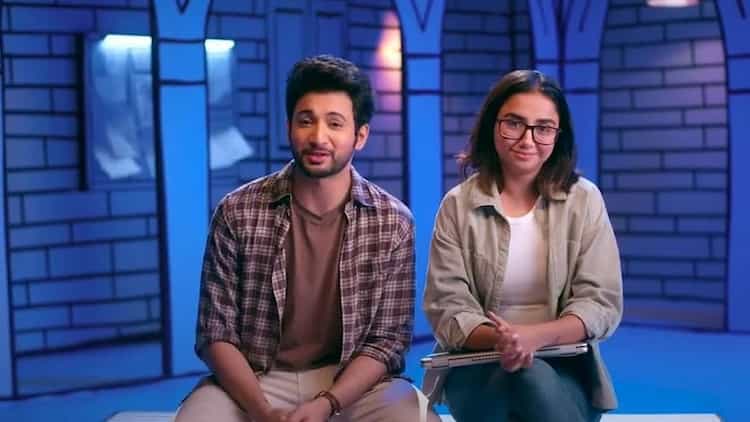 There are huge numbers of fans who have been waiting for the very same video to be released. Along with that, Netflix India also released a notification according to which they are going to release the Mismatched Season 2 trailer by tomorrow.

Along with the official announcement, there is one more video released by Netflix. The video is absolutely amazing! Remember the iconic cold coffee spilling scene from the first series’ first episode? 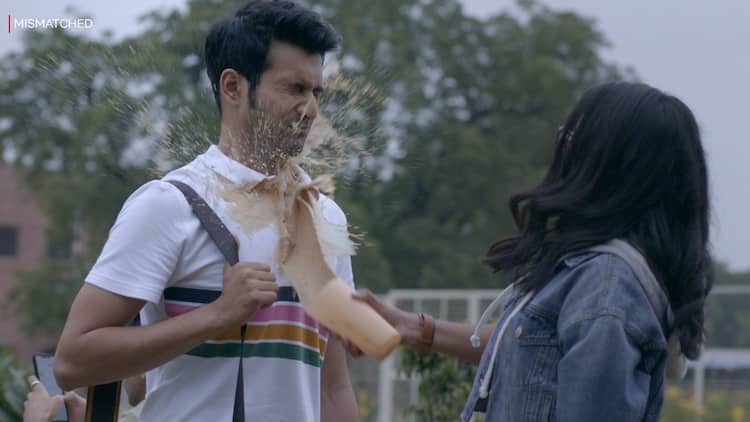 Dimple spills coffee over Rishi and here in the Mismatched Season 2, the scene is repeated but with a twist. This time, it is Rishi who is spilling the cold coffee over Dimple when he is quite angry with her, but at the same time can’t tell her anything.