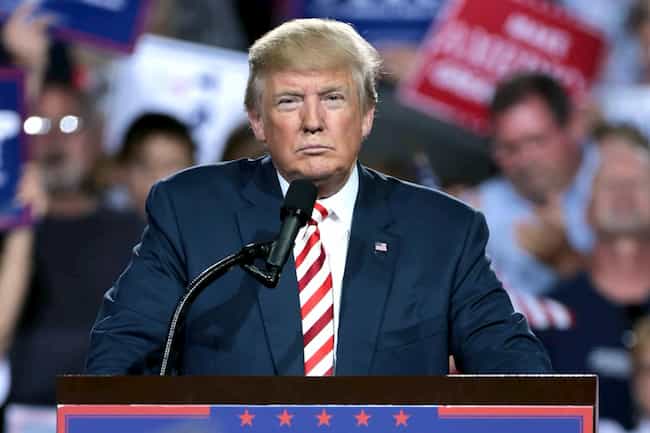 The COVID-19 pandemic is running rampant in the United States. Unemployment numbers are at Great Depression-era levels. Another scandal has been unearthed showing that the American government ignored A Russian threat against U.S. military personnel.

In the midst of all this tragedy and uncertainty, U.S. President Donald Trump went golfing. The day after it was announced that the USA had recorded its largest number of new COVID-19 cases, the President packed his clubs and headed to his Virginia golf course.

According to CNN’s count, it’s the 271st time he’s gone golfing during his 1,272-day stint in the White House. That’s one trip to the links for every 4.693 days in the Oval Office.

Even Tiger Woods doesn’t golf that much.

By comparison, Trump’s predecessor Barack Obama, who was criticized frequently by Trump for spending too much time on the golf course, played 333 rounds during his two terms as President.

Nero fiddled while Rome burned. Trump hacks at golf balls while the American Republic crumbles around him.

The good news – perhaps the only good news for the Trump Administration – is that Tuesday, November 3rd, is still 129 days away. The bad news is that he has a massive amount of work to do if he wants to win reelection to the Presidency in 2020.

While he’s plummeting in the polls, coronavirus cases are spiking across at least 10 states. Texas, Arizona and Florida, all states that went for Trump in the 2016 Presidential election, are being hit especially hard with COVID-19 cases.

According to research by Johns Hopkins University, Friday saw a one-day record of 40,000 new coronavirus cases across the USA.

The prospect of further shutdowns is playing a role in the Dow Jones Industrial Average’s decline over the last three weeks. The Dow closed at 27,572 on June 8th. It was down to 25,015.55 by the end of trading on Friday.

At the same time, the New York Times reported that the Russian government has been paying bounties to Afghan rebels for killing U.S. troops. According to the report, the Trump administration was aware of this as early as March and has taken no sanctions against Russia.

Democrat candidate Joe Biden is favored to win the 2020 Presidential election in both the polls and the odds. Photo by: Gage Skidmore (flickr).

For the fourth straight week, Trump’s reelection odds worsened. The change in the betting line this time was by a fairly significant margin.

Being behind in the polls is nothing new to team Trump. The 2016 Presidential race showed Democrat Hillary Clinton out front for most of the race but it was Trump who crossed the finish line first.

During that Presidential election, though, the betting odds weren’t reflective of the polls. Trump was given a chance to win by the major online sportsbooks.

This time around, the 2020 election odds have been trending solidly against Trump throughout the month of June.

Within two days, with Black Lives Matter protests sweeping the nation following the death of George Floyd at the hands of the Minneapolis police, Biden (-114) moved ahead of Trump (+101) for the first time.

The odds have steadily worsened for the President since that day. Currently, Biden is the solid -145 favorite. Trump continues to slide, dropping to +123.

All around Trump, there’s evidence that his base of support is growing smaller with each passing day. Just 6,200 showed up for his rally last week at the 19,109-seat BOK Center in Tulsa, Oklahoma.

Polls are also displaying that the majority of Americans are supportive of the Black Lives Matters protest. Even in the heart of Trump country, there’s signs that people are turning away from his divisive rhetoric. NASCAR, which welcomed Trump to serve as grand marshal at the Daytona 500 earlier this season, banned the Confederate flag. Mississippi announced Saturday that the Stars and Bars would be removed from the state flag.

People associate Biden, who served two terms as Obama’s Vice-President, with a calmer period in U.S. history. There isn’t the venom and toxicity about him that surrounded Clinton, a factor that Trump was able to effectively weaponize during the 2016 campaign.

This time around, it’s the Biden camp who are taking advantage of Trump’s toxic nature. They’ve come up with clever campaign ads, employing words of praise that fervent Trump supporters such as Sen. Lindsey Graham spoke about Biden.

Economically, Trump also appears to be making the same mistakes that Republican President Herbert Hoover incurred at the start of the Great Depression in 1930. Trump is talking about implementing further tariffs on foreign goods.

Hoover did likewise, and it further deepened the impact of the Depression. He lost the 1932 Presidential election to Franklin D. Roosevelt. Hoover is just one of two Republican incumbents who’ve failed to win a second term as President.

With the Trump trainwreck running off the rails, he could soon add a third to that list.