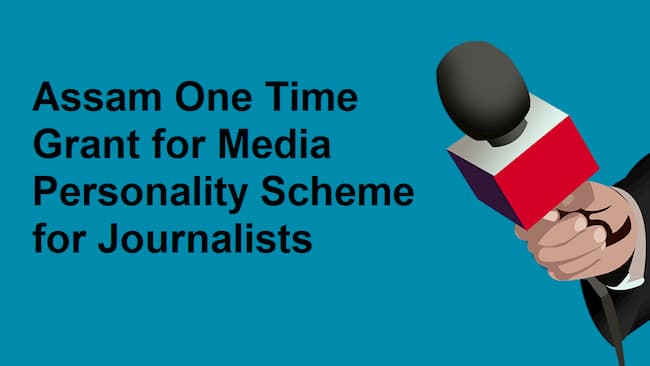 Media is a part of Indian politics. The freedom of Media is most important to listen to the common men’s voice. The steps that are taken by the government for the people of India are really beneficial for them or not; the detailed information on this matter will give the media of the nation.

However, the media should also maintain the law and condition of government. As the media telecast the failure or lower man problems to the country, the media also have to telecast the success story of the government to the nation.

The state government of Assam will be providing a great amount of incentive to people working hard in media. The Assam One Time Grant for the media personality scheme will make sure to help the journalists and media personalities.

In this article, we will discuss the Assam government scheme for the journalist to give financial assistance.

As we mention above that this scheme will only benefit the person who is doing journalism. Recently, media play the most crucial role in the nation’s polity. The ruling party and opposition party controversies are telecast in front of the whole country.

The voice of the common man and their problems is also telecast before the nation. Under this scheme, the Assam government will offer the financial incentive to the journalist who has published not less than three success stories of government in the past one year.

A person who has done the same work in the past one year can apply for the scheme. The Assam government will encourage those people who have to publish the scheme of government and success story of government.

However, the Assam government will only give the one time grant. Not every month, the person will get a grant from the government. However, only those journalists will be awarded who do not connect to any political party.

The main objective of the government’s one-time grant is to encourage the journalist to become unbiased, not partial, and bonafide, and not attached to any political party. The journalist should be true and not a biased sentenced person.

With the help of this scheme, the person can get financial assistance from the government, and they can use this in their needs. If any journalist with law income and he/she can not be connected to any other political party can apply for the scheme.

We will give you the eligibility criteria of the scheme so that the journalist person can come to know for the application for the scheme.

Eligibility criteria of the scheme: